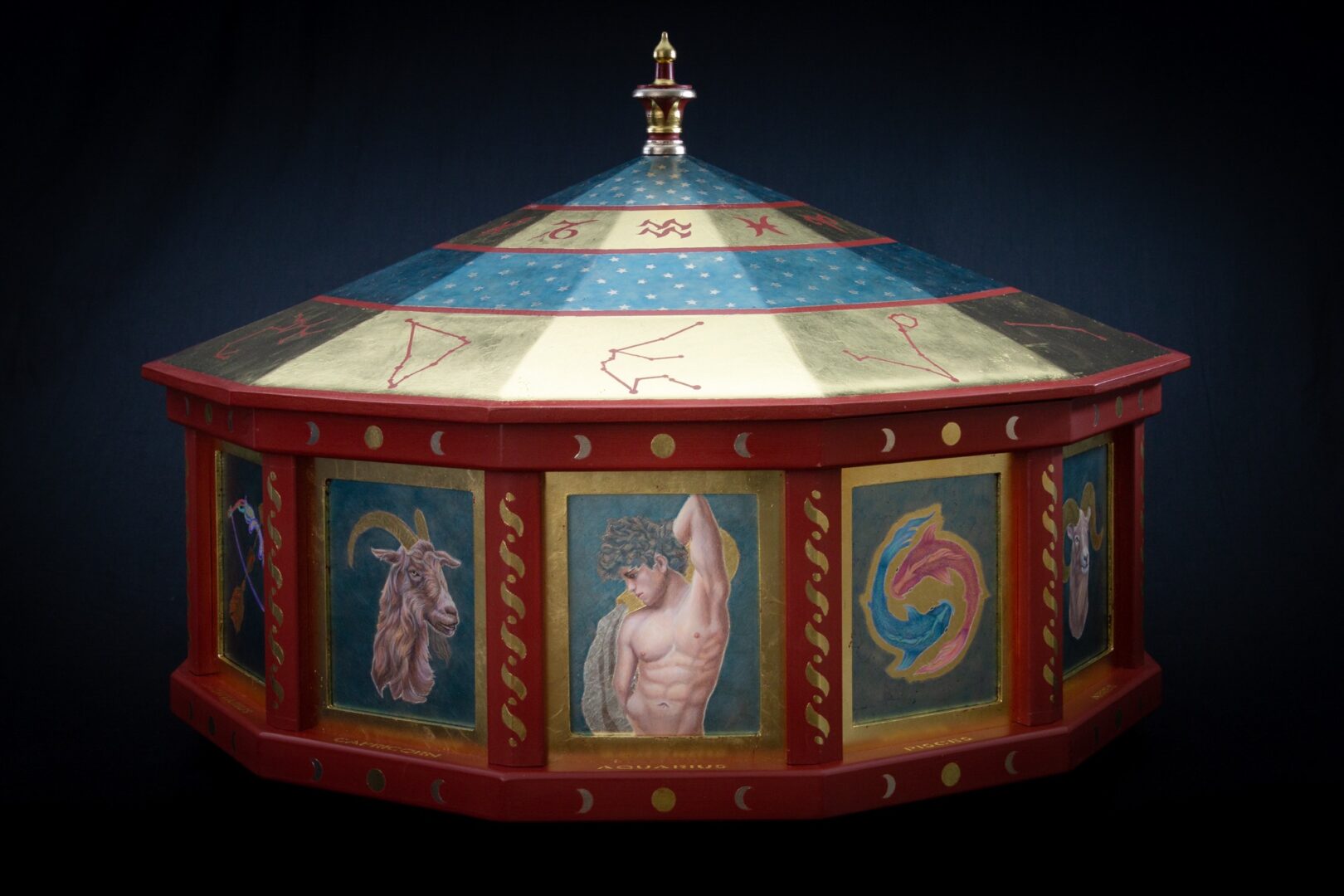 I’ve always had a fascination with the cosmos and our relationship to it as human beings. In particular, I’m captivated by the greater astrological cycles of time and how they affect human consciousness. The energy of each zodiac has a certain influence on human consciousness and in the larger scheme of things influences cycles of golden ages and dark ages of human civilizations.

I created “PRECESSION OF THE EQUINOXES” as a rotating carousel expressing our eternal cyclical motion through the zodiac. It sits on a motorized turntable rotating counterclockwise going through each of the zodiac panels backwards in the same manner we do over a 26,000 year span. This piece was not only inspired by my fascination with the subject, but it also satisfied my desire to create a 3-D work of art that still functions as a series of paintings.

The scientific term “Precession Of The Equinoxes” refers to the observable phenomena of the rotation the heavens from the viewpoint of the earth.  Over time, the constellations appear to slowly rotate around the earth, taking turns at rising behind the sun at dawn on the vernal equinox. From the earth’s point of view, we appear to slowly rotate backwards through the constellations over time. This is due to the wobble in the axis of the earth, which is tilted at about 23.5 degrees relative to the sun. If you observe a spinning top, its axis goes around in a circle. The earth does the same thing causing a westward shift of the spring or vernal equinox. The sun as a pointer against the zodiac is gradually tracking backwards through the constellations 1 degree every 72 years taking 25,920 years to make one complete cycle through the zodiac. Right now Polaris is our north star, but it hasn’t always been. Because the earth traces out a celestial sphere every 25, 920 years the North Star will always change in relation to our axial position on the circle. 5000 years ago, the North Star was Thuben in the constellation Draco, in 12, 000 years it will be Vega in the constellation Lyra.

PS. It may not seem like it, but we are on the upswing into another golden age as we are entering into the age of Aquarius!

Posted in About My Work